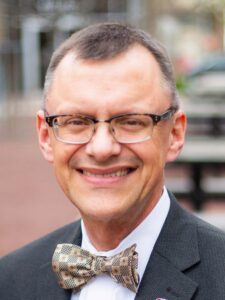 Jake Baggott joined UW–Madison in May 2019 as the Associate Vice Chancellor and Executive Director of University Health Services. He provides leadership for departments within University Health Services and oversight of Recreational Sports. Baggott has over 30 years of experience in student health and wellbeing and student affairs. Prior to his role at UW–Madison he served as the Assistant Vice President for Student Health & Wellbeing at the University of Alabama at Birmingham following a role as the founding Executive Director for Student Health & Wellbeing at UAB. Prior to UAB, Baggott served in leadership roles for nearly three decades at Southern Illinois University, including serving as the Chief of Staff to the Chancellor and a progressively successful 25 year career as an administrator in the SIU Student Health Center.

A first generation college student, Baggott is a three degree graduate of SIU, including the recipient of an advanced degree in Legal Studies from the SIU School of Law where he specialized in Health Law & Policy. Baggott has served in numerous leadership positions at the ACHA national and affiliate level including serving as ACHA’s president and nine years on the ACHA Board of Directors. He has been actively involved in advocacy for the Association since 2008 on multiple issues. Baggott is an inaugural faculty member of the ACHA Leadership Institute and a Program Consultant for the Association. In 2012, he was named a Fellow of the American College Health Association and in 2018 was named the recipient of ACHA’s Edward Hitchcock Award for Outstanding Contributions in College Health. Baggott also completed a 22-year military career in the US Army and Army National Guard, retiring at the rank of First Sergeant in 2003.